The goal is 26.2 miles on October 8th at the Chicago Marathon. Training has begun and I have a calendar using a training plan I got from the coaches involved with Team Challenge. I even plugged it in to a calendar that accommodated my plan to have my long runs on Sunday morning. I have had trouble following it because I feel like I’m not getting adequate rest between runs.

Last weekend, I needed to do 9 miles, but I wasn’t returning from an out of town wedding until late Sunday afternoon. I was able to plan a run for Monday morning, but I didn’t want to get up early, so I scheduled an 8 am meeting time with a friend. I was positive talking the heck out of that run ahead of time. I kept telling myself it was going to be the best run since my boot and that it was going to be epic. In reality, it was hard to put one foot in front of the other for almost 6 miles. The conversation and adorable woodland creatures along the trail kept me moving forward for almost 6 miles. When she and I were done running, I decided to hop in the car and head home to get sunscreen before finishing the rest of my run. I wouldn’t have finished that first bit had I been alone. The second part was rough and it was solo. The heat and humidity were bearing down. I got one cheer from a car driving down the road and that was a nice distraction. I struggled to keep moving and was running on pure desire to get home. I went home and halfheartedly stretched so I could hit the shower. Little did I know that for the entire week following that run, I’d have a painful soreness in my right calf and my hamstring would be achy.

My first run after that was Wednesday. It was tough, but it was like shaking off cobwebs. My legs were loosened up for the last half of the run. I was able to focus my attention on random things like, “Hey a White Castle box,” and “We don’t even have White Castle near here.” I looked around and took in the scenery and tried not to focus on any discomfort. I felt pretty good finishing up and I actually did my hip strengthening and stretching afterward. The soreness continued, so my next run was replaced with a session of runner’s yoga.

Saturday was my long run day this weekend due to social plans. I’d planned everything out ahead of time. I was going to ditch the camel bak hydration backpack I’d used in previous weeks and go back to the Amphipod brand hydration belt. I filled one bottle with my BCAA powder mixed with water and the other with just filtered water. I put a protein shake in a lunchbox cooler. I planned to meet the Saturday group at 6:30 am. I’d lost my Garmin watch and found it after a frantic search through my belongings. It was on the passenger seat of my minivan face down and the same color as the interior. My frozen water bottle was completely thawed, so my buffer from the heat wasn’t going to be there. I shook it all off, showed up at the meeting place at 6:45 with nobody else there, and I did a little arguing with my brain to take off on the run. My watch went off a few times for the 5 minute run, 1 minute walk intervals. I ignored the first 2, then I started walking quickly the 3rd time it went off. I wasn’t dropping too far below a 13 minute per mile pace with the walk breaks, so I just kept doing the intervals. I reserved water and gel breaks for walking intervals and it worked out well for mentally preparing. I passed people I knew periodically on the trail and felt encouraged to keep going. It was the epic run I’d wanted the previous week. Then, toward the end, my stomach. It was revolting. I didn’t #2 before leaving for my run. I was about 1/2 mile in either direction from a bathroom and both were portable bathrooms (porta potties). I opted for the direction of my car and ran/walked my way back trying to ensure that no accidents would happen to me. I was a tenth of a mile from the big 10. I had to go, though. I ran to the bathroom, went in, paused my watch, and used the porta potty. I made up the last .05 running from the bathroom box to my car to get hand sanitizer and get my yoga mat. I felt energized instead of exhausted. 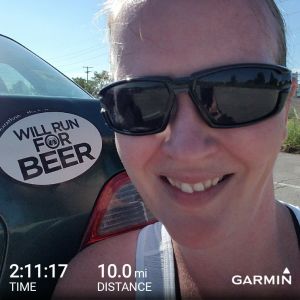 I will run for beer, guys….lol

I made the decision after running that if I was going to have good long runs,  I was going to need to adjust the plan. I read some articles in running magazines and websites about training and found that it is not unusual to have as few as 3 runs per week in training for a marathon (assuming other cardio and resistance is included in most other days). I invited myself to join some running buddies on their swim days and they welcomed me. Tomorrow, weather permitting, I’ll be joining my friends in the morning to swim. Wednesday and Thursday, I’ll run. Friday, I’ll get on the elliptical or have a instructor led cardio workout in addition to resistance. Saturday remains rest day so I can long run Sunday morning. Today, I did a resistance workout midday and realized that it has been too long since I’ve done my planks or burpees. Running can suffer from not keeping up strength in all areas. I’m changing my plan to prevent burnout and to prevent injury. I want to do this marathon. I wasn’t balancing my whole body fitness properly and it was affecting my running. Now we’re going to see how well this change of plan works and adjust as needed. I’m happy I can do that.

Also, I am fundraising for Crohn’s and Colitis through Team Challenge. I have 90 days until the marathon and I’d like to raise $2k by then. So far, I’m a little over $900. Consider helping? Thanks!  My Personal Fundraising Page

2 thoughts on “Adjust and carry on”