It was finally [temporarily] warm in the central US. I picked up groceries, rushed to put them away, and then tossed on short sleeves with short pants for running. I grabbed my headphones, checked weather for lightning alerts, and headed out for an outdoor run where I didn’t need gloves and ear warmers.

It was just as amazing as I’d imagined it was going to be once I started out. A little wind and some gray skies were nothing since I had 60 degrees in the lovely outdoors. I must have been feeling rather optimistic. I wore my Brooks Ghosts that I’ve been avoiding wearing in the snow because they’re such a vibrant pink color, I didn’t want to mess them up. After a few sinks into the mud from avoiding puddles, I accepted that they were just going to need a cleaning when I finished up. I headed to the trail head nearest my house and got on the path with no planned route.

I like when I don’t plan a route because it feels more like I’m playing than exercising. I can think of things I want to go see. The trail was interesting because all of the rain and the creek running along it had some pretty views. I stayed on the trail because I saw a few other people running along. I had some great tunes going and I was working on making negative splits when I completed mile 2. I thought of turning around and heading home, but the end of the trail was less than 1/4 mile ahead, so I kept going.

The clouds opened up and the rain started to pelt my face, chest, arms, and the bare parts of my legs. I took pause at the end of the trail and composed myself. Once I restarted, my pace was faster than it had been the rest of the run. I was panting, running into the wind and rain, and loving every moment of it.

I am in the throes of depression. Where most people just see that things are a little bad, I see nothing ahead. I have very little interest in planning for the future because I’m reluctant to think that way. It’s like driving in a white out. You know the road is there and you can see a few inches out in front, but you’re not sure you’re going to make it through or if stopping would actually be more dangerous. Either way, the outcome is not pleasant because you see both ending in calamity.

Today’s run was untangled a bit of the depression, I hope. Running helps me remember the me who is optimistic and encouraging. I hate depression and I have a hard time getting myself to do anything when I’m at my worst. Little victories…. they’re actually HUGE.

This is a snap of my friend’s cat, Kidden (the closest I have to my own) and he’s got the right idea here: 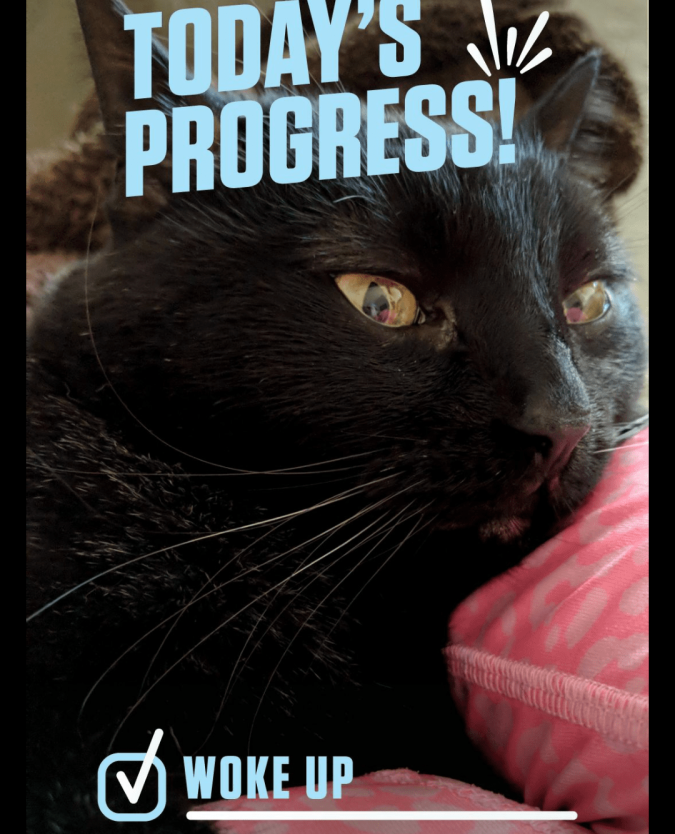 One thought on “Finally warm”