I’ll try to keep up each week in training, but it won’t always be just about how training is going. Today, I’m nursing my leg from a middle of the night ‘Charley horse’ in my calf and I still have some training miles to knock out this evening. It’s been awhile since I’ve been awakened by a sudden muscle cramp. I’d forgotten how annoying it is.

This is week 2 of training for my fall half marathons. My training plan is much different from ones I’ve followed in the past and involves more miles than what I’d anticipated.  The plan I’d chosen was one to help myself run a ‘fast’ half marathon. While I’d normally insist that I follow a training plan to the letter, I’m concerned about injury from over training. I’ve cut an entire day out of the plan for the duration of my program. I won’t run on Mondays. I’ll cross train, of course. A well rounded athlete is more likely to avoid injury. In the past, Monday runs were marked “only if you feel good,” and I think that’s been an effective part of past training.

I find it odd to describe myself as an athlete. I am a runner and I do races. I train for my races and I try to ensure that my body is strong and healthy enough to perform. I’ve just got the “mom bod” going on and I’m not meeting my time goals. I want to beat my personal best at at least one of the two half marathons I have on my schedule for this fall. I have time to work on that and there’s no way I would beat the time if I didn’t actually put in the work. I’m also more concerned about what my body can accomplish than how it looks.

I’m gradually getting faster and running is feeling less tedious. I enjoy the couple of group runs each week. It helps me to socialize with other adults, which is totally important in parenting life. Running with the group helps me adjust my pace and try harder than I do running alone. Group running holds me accountable for running on days when I’d probably find an excuse not to run. I had a 4 mile ‘speed work’ run this Tuesday. While it wasn’t as I’d planned, I had a bit of faster running than I have recently.

As far as mental health, I’d be doing better if I were sleeping right. Increasing my activity to more days and miles a week makes it harder to sleep. I’m often awake in the wee hours [that are too early to actually get up for the day] feeling like I could get up and go run. Then, I get to overthink all of the things I did and said the previous day before I fall back to sleep. It isn’t unusual for me to have that for a few weeks starting out in training, but it is annoying.

Thanks for reading! I appreciate your comments and suggestions. Keep them coming!

Here’s a dog and puppy photo because I take a lot of them and I can’t wait until she can run with me. My older dog is getting used to her. I might even say he likes her. 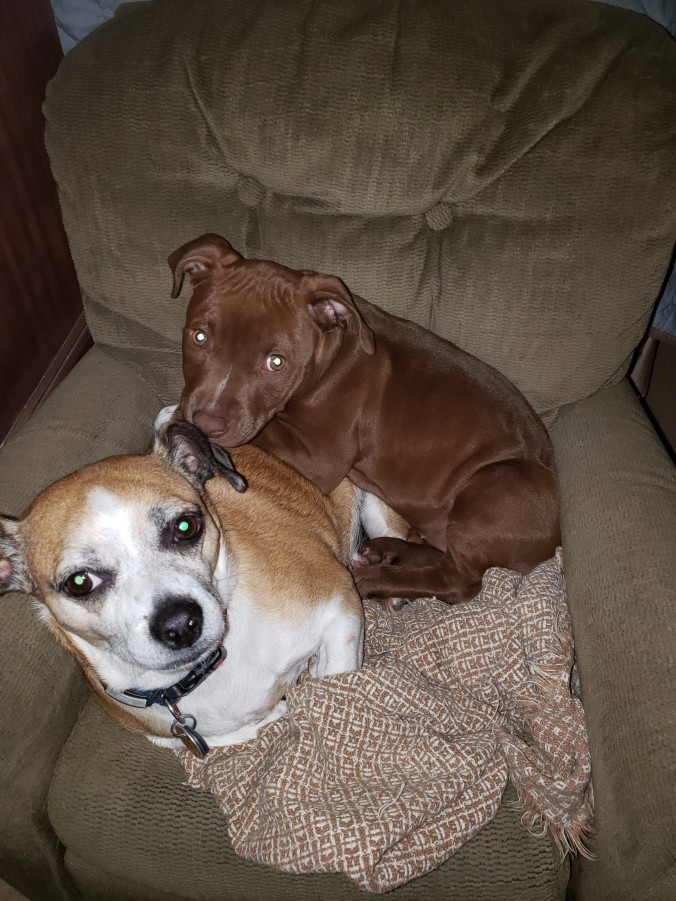 I call my blog, “Jenn’s Journey,” and I’m sure I’ve explained my reasoning in the past. I’m hoping to become more fit and healthy, but there isn’t necessarily a stopping point or single goal. The experiences leading up to something, also known as the journey, are more important than the destination.

Enough of that. I started training for my fall half marathons this week. It came at a great time. My anxiety turned on last week and would not shut off. I sought out friends to help me through it and I was so happy that I did. Being in ‘fight or flight’ mode for days is exhausting. I actually started to feel physically sick. My husband took a day off of work for me to rest because he saw the toll it was taking on me and how tired I was. Boy did I rest. I slept most of the day and got up to tidy the house before heading back to my room to lie down some more. Usually, I’d say I wasted so much time, but I don’t know that I needed anything more than to reset.

Saturday, I joined my training group for a kickoff meeting and run when the weather decided that there would be no run. We had lightning followed by a downpour that went on for quite awhile. I got to have a chat with friends at the nearby coffee chain. Later, I went to the local brewery for yoga class and beer with another friend. I had a relaxing day overall and I even watched a movie on my Prime.

Indoor beer yoga due to weather

Sunday, my husband decided he was taking the kids to the pool and insisted that I stay home and enjoy some kid free time. Of course, I decided to hop into my running gear and hit the trail. It was so hot and humid, but I figured that I’m only at the start of training and some days will have weather that isn’t ideal. I had a great time running and even did my stretches outside of my house so my dogs could play a little while out there. The pooling of sweat on the concrete beneath me was a source of pride when I saw it.

I could’ve just collapsed into the kiddie pool at that point.

I showered and we went to church that evening. The message was about….rest. About not forgetting to be still and relax. My pastor actually said that people are so wrapped up in being busy that they forget to not be busy. Message taken, sir. I took a few days to relax after pushing myself to do ‘it all’ for awhile.

I can’t be the polished mommy of the mom blog world. I don’t try to be. Parenting is hard and it isn’t always play dates and Pintrest worthy projects. So, I like to run. I like taking time to myself. It makes me better at what I do and makes the time I spend with them more enjoyable.

We still have the puppy we found and nursed to health. She’s sweet and funny. I’m totally mad at her for making me love her so much. Even my six year old ‘mutt’ named Trevor gets up and plays with her all of the time. It’s been a lot of work and I take it in stride. I think I might have a running buddy when this puppy gets older, though. 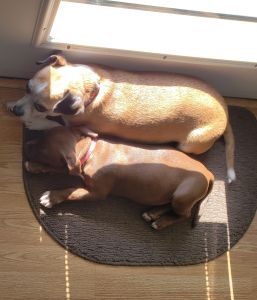 Trevor is the lighter top dog. Aurora is the darker puppy.

Have you started training for a fall race yet? Which one? I’m doing Whiskeydaddle in Peoria and Indy Monumental in Indianapolis. I can’t wait to go for my next training run!

My depression and anxiety have been really annoying lately. I had a shaking anxiety attack that left me completely exhausted. My depression has been rather unkind in making me feel ‘not enough’ lately. It is tiring.

My running has taken a huge hit lately. I had intense hip pain that spread into my pubic bone. Stretching, ibuprofen, and Epsom salt baths were not helping at all. My runs were reduced to the minimum of 1 mile per day due to my reluctance to stop the running streak I started on Memorial Day. The runs became slow and were often more of a quick walk. Running is my outlet for my days spent “momming.” I listen to music, pray, and/or sometimes just relish in the fact that I’m not in the heavy air of conflict (with 2 kids 18 months apart and a teenager).  The mile breaks weren’t enough. I physically needed the rest, but I also mentally needed the outlet.

I visited the chiropractor, who needed to adjust my hips and the left side of my pubic bone. My husband encouraged me to go to a fun run that involved a visit to a brewery afterward for a social. I guess I’m a little insufferable when husband says: “get out of here awhile.” I went and planned to plod through my mile, and go have a beer and chat with other people who enjoy running that I don’t see as often as I used to.

I met up with people I hadn’t run with in awhile and they were doing run/walk intervals. I had such a good time talking to them and spending time out on the trail, I went 3 miles with just a little soreness and not the same pain I’d been having. It was a relief. Then, I got to talk to even more people after at the social. I actually stayed awhile and really enjoyed myself catching up with people and talking.

I had one more adjustment at the chiropractor to get the hip pain under control. I invited friends to join me at a pop up yoga class at a local brewery Saturday morning. The yoga instructor worked on hips at the request of a few people including me. It wound up being hot yoga because it was already in the 80’s and humid at 10 am. I think the session really helped my hips.

This weekend, I intended to knock out some miles to ensure I’d be ready for the 4th of July race that is 5 miles. Saturday night, my stomach wouldn’t behave and I had to stop in at my house at 3/4 of a mile to use the restroom. I made it another 3/4 of a mile before I had to go back home for the same reason. Sunday, I planned a visit to the gym. My stomach wasn’t agreeing with my plans. I took a nap and didn’t wake up until the evening when it was time to leave for our 5 pm service at church. While we were at church, a storm rolled in and the temperature dropped dramatically. After dinner, I was able to change into running gear and head out on a 3 mile run. It was still hot. The humidity was still there. I enjoyed it, though. I felt myself going faster than I had been. I glanced at my watch and saw the distance just pass by. I stopped running at the 3 mile mark and walked the remaining 1/2 mile home as a cool down. I took it all in. Finally. I got a run in.

I was exhausted after I did my hip exercises and stretches. I sat on the floor in my room and drank my electrolytes and played on my phone instead of hopping up to take a shower. It was tiring, after all.

Almost a grin. I’m pleased with myself.

My running doesn’t miraculously heal my depression or my anxiety. I’ll admit that I’ve wanted it to. I thought if I could just go further, faster, or better that I’d be healed. While that’s not the case for me, it dramatically reduces the intensity of the symptoms. 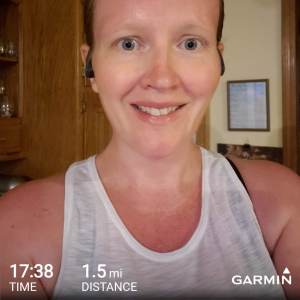 Do you feel like fitness helps you in another aspect of your life? Does it help your mental health?

Thanks for reading! I try to come back weekly with updates for you.