A couple days ago, I wrote about my trip to Detroit. Now, I want to talk about the actual Detroit Free Press International Half Marathon that I ran.

Sunday morning was 46 degrees and it was dark when the race began. I had a short sleeved shirt on with sleeves that were separate and removable. There was a sea of people in every direction. There were people in bathrobes. There were people in tank tops and shorts. Judy and I stood in our spot awaiting the start and agreed to run together as much as possible. There were speakers everywhere so the crowd could hear the announcer that was set up at the start line. Each corral was released a minute from the previous. Being in corral “L”, we started the race quite a bit after the “gun time”.

We ran the streets of Detroit approaching the Ambassador Bridge that leads into Windsor, ON [Canada]. Finally reaching the bridge, Judy and I ran for awhile. We looked down at the Detroit River and the sights surrounding it. There were Canadian border agents on the sides and a few people were stopped to have their race packs inspected. The bridge was a mile of steady incline and I realized that it was not very far into the race and was pushing myself too soon. Judy agreed to walk the hill. Other race participants stopped and took selfies on the bridge. One guy stopped in the middle of the path for a selfie. We crossed over into Windsor and got high fives from border agents as we crossed through the lanes meant for cars.

Windsor was a nice city with a path along the river that had sculptures along the side. Judy spotted dog pulling a man with rollerblades at what looked like a pretty quick pace. It was so odd and funny. There were crowds along the road cheering and holding signs. Soon, we were nearly halfway through the race and entering the tunnel back to the US. It was a mile underwater. People were shouting and making all kinds of noise through the tunnel. It was hot in there. I was breaking a sweat. The end was an incline that I think was made more difficult by feeling so hot. Then, high fives to US border agents and smiling for the camera to catch a photo of us just after a “Welcome to the USA,” banner.

We ran together, walked the hills and the water stops, kept up conversation, and took in all that was around. Toward the last mile, Judy still had plenty of energy and started to get out ahead of me. I offered, “run YOUR race,” as my nod to go ahead. She reassured me that I could finish and she went along at her pace.

At first, I turned on my music. I’d had my headphones on pause the entire time so I had music if I wound up alone. I paused it and I prayed. I was so grateful that I’d enjoyed the race and I felt good. I praised God and I decided I’d finish the race showing appreciation. I resumed my music, paused a moment to drink from my water bottle, and took off toward the finish. I started to pass people and I realized that I felt good. As I crossed the finish, I pointed above to praise God, like many athletes before me have done. I was so pleased that my finisher photo captured that.

I met up with Judy at the finish after gathering my medal.

We got our snacks and went to the after party. There was a beer tent there that said “Save a cat/dog. Buy a beer.” So I HAD to buy a beer and socialize a bit. Then, Judy went back to her hotel to get cleaned up. I ran into more friends and hung out a little longer at the after party before walking back to the hotel and gathering my things to go. I started to walk to where Judy and I were going to meet and I couldn’t get around the race. We came up with a new plan and she parked on the road I was on as close as she could near a barricade. I walked 6 blocks with my bags feeling heavier with each block. I switched around a few times and I set my things down for a breather a few.  While I loaded my things to the car, the police lifted the barricades. That figures, right? 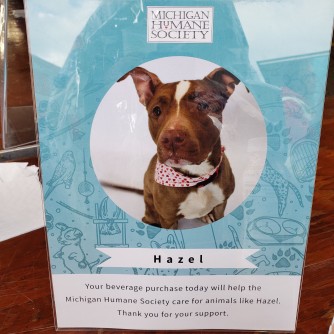 We rode out of the city and stopped for lunch before leaving Michigan. I had my first meal at Texas Roadhouse. Not bad. I took a photo on the way home of the sunset. Because Judy and I had spent so much time together that day, we saw the sunrise together and the sunset.

I didn’t get a personal best or even come close at this race. I had a great time, though. There wasn’t a nagging injury or the feeling that I couldn’t finish. I got to have my first view of Detroit, Michigan. I got to go into Canada for the first time. I got to cross the border running while giving high fives to border agents both ways. I’d say that was an experience that I’ll never forget and one that many people are unlikely to have.

Thanks for reading! I actually have some stuff to say about mental health soon, so I’ll be back for that.